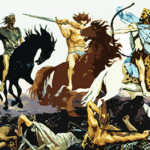 During past month I’ve worked at new classes. As we have specifics that it is not possible to add new classes without server wipe, I’ve decided to add as much classes as I can, in one go, so we won’t need more wipes in nearby future because of this particular reason. So I’ve added all classes which I wanted to have in Tangaria.

Some of these classes still require a lot of work as designing 20 classes in one month it is kinda quite hardcore task. So please report your opinion and test results in our Discord. List of new classes with short description (for more detailed descrioption check ‘Classes‘ in the guide):

There are plenty of other updates, but I’ll publish them a bit later. Please test new classes and report in Discord if any problems noticed. Some of new classes are drafts and a lot of stuff needed to be rebalanced and polished. I need your feedback! Thanks.

📜 Bear in mind:
Without light you won't be able to see most monsters, cast spells, read scrolls, or, in general, see the dungeon.