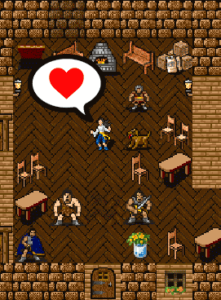 Long-long time ago charisma (CHR) stat was removed in Vanilla (V) Angband. The reason behind this decision was that CHR were used only for shop prices and V maintainers decided that to get rid of it was actually easier than to make it useful. Minimalism trend is strong in roguelikes for quite some time already (eg DCSS removed food recently) and I see the point.. but it’s quite opposite vision to my concept: “the more – the merrier”… and I loved CHR stat very much so it was my dream for years to bring it back – as having it gives plenty of special flavour to the game – being a powerful, but ugly troll who have not trouble to crack a few skulls in the dungeon, but getting robbed by huckster every now and then in town shops – makes sense.

So as recently I’ve finally started to train my coding skill a bit, I’ve tried to implement a few simple tricks on making CHR more interesting. I wanna remind that CHR is very special end-game stat – the only way to increase Charisma is to drink potions of Augmentation. As it’s quite new approach – I’ll have to do some rebalance later on. So here is Tangaria’s latest update…

Beat around the charisma bush: