Finally first stage of dungeons redesign completed! I rarely post T’s news nowadays, but work is going on at daily basis; some of new stuff:

Some examples of new dungeons design: 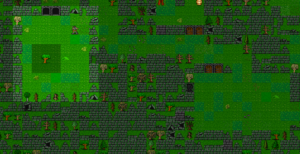 This is nefarious tree monster.. It spreads gloom around itself to fool new players.

📜 Bear in mind:
They say that without mage staff a mage should crawl to move around.